The development and study of new solvents has become important due to a proliferation of regulations preventing or limiting the use of many conventional solvents. In this work, the suitability of the Suzuki–Miyaura reaction to demonstrate the usefulness of new solvents was evaluated, including Cyrene™, dimethyl isosorbide, ethyl lactate, 2-methyltetrahydrofuran (2-MeTHF), propylene carbonate, and γ-valerolactone (GVL). It was found that the cross coupling is often unaffected by the choice of solvent, and therefore the Suzuki–Miyaura reaction provides limited information regarding the usefulness of any particular solvent for organic synthesis. Click here to read.

Abstract: Three dipolar aprotic solvents were designed to possess high dipolarity and low toxicity: N,N,N’,N’-tetrabutylsuccindiamide(TBSA), N,N’-diethyl-N,N’-dibutylsuccindiamide (EBSA), N,N’-dimethyl-N,N’-dibutylsuccindiamide (MBSA). They were synthesized catalytically using a K60 silica catalyst in a solventless system. Their water-immiscibility stands out as an unusual and useful property for dipolar aprotic solvents. They were tested in a model Heck reaction,metal-organic framework syntheses, and a selection of polymer solubility experiments where their performances were found to be comparable to traditional solvents. Furthermore, MBSA was found to be suitable for the production of an industrially relevant membrane from polyethersulphone. An integrated approach involving in silicon analysis based on available experimental information, prediction model outcomes and read across data, as well as a panel of in vitro reporter gene assays covering a broad range of toxicological endpoints was used to assess toxicity. These in silico and in vitro tests suggested no alarming indications of toxicity in the new solvents. Click here to read the full application

A comparison of the solvation power of the green solvent 2,2,5,5-tetramethyloxolane versus toluene via partition coefficients (Journal of cleaner production, 2019)

Abstract: 2,2,5,5-tetramethyloxolane [previously published as 2,2,5,5-tetramethyltetrahydrofuran (TMTHF)] has recently been demonstrated as a greener and cleaner alternative to toluene in several applications. Assessing similarities in properties of toluene and 2,2,5,5-tetramethyloxolane is crucial for establishing this molecules potential to replace traditional non-polar organic solvents in the cleaner production of chemicals and materials. However, the Hansen solubility parameters (HSP) and Kamlet-Taft parameters (KT) give conflicting views on their similarities and differences, which necessitates a full comparative characterisation of the solvation environment of these two solvents. Such comparisons have been achieved through a direct and extensive determination of partition coefficients between each of the two solvents and water. The partition coefficients and Abraham’s solvation parameter model have quantitatively clarified the similarities and differences in properties of 2,2,5,5-tetramethyloxolane and toluene. Solutes of high dipolarity and hydrogen-bond accepting ability tended to favour the aqueous phase in both systems, while large molar volume and high refractive indices favoured the organic phase. A significant difference between 2,2,5,5-tetramethyloxolane and toluene was observed for hydrogen-bond donating solutes. In general, such solutes strongly preferred the aqueous phase in the toluene/water system but preferred the organic phase in the 2,2,5,5-tetramethyloxolane/water system. This was due to the interaction of the protic solutes with the lone pairs of electrons on the ethereal oxygen of 2,2,5,5-tetramethyloxolane, a feature that is not present on toluene, and opens up new possibilities for applications of this sustainable solvent in liquid-liquid extraction, particularly in the isolation of natural products. As toluene is such an important solvent in the chemical industry, its replacement with a greener alternative such as 2,2,5,5-tetramethyloxolane would be hugely significant for cleaner synthesis, extractions and separations. Click here for full publication. 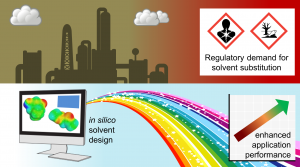 Abstract: There is a demand for safer and bio-based solvents, brought on by legislation and sustainability objectives. The prediction of physical properties is highly desirable to help design new molecules. Here we present an in silico approach to obtain calculated Kamlet–Abboud–Taft solvatochromic parameters using virtual experiments. The tautomerisation equilibrium of methyl acetoacetate and dimedone was calculated in different solvents with COSMO-RS theory and converted into estimates of solvent dipolarity and hydrogen bond accepting ability, respectively. Hydrogen bond donating ability was calculated as a function of the electron deficient surface area on protic solvents. These polarity descriptors correlate with rate constants and equilibria, and so ability of calculated Kamlet–Abboud–Taft solvatochromic parameters to recreate experimental free energy relationships was tested with sixteen case studies taken from the literature. The accuracy of the calculated parameters was also satisfactory for solvent selection, as demonstrated with a 1,4-addition reaction and a multicomponent heterocycle synthesis. Click here to read the full publication

Safer bio-based solvents to replace toluene and tetrahydrofuran for the biocatalyzed synthesis of polyesters (Green Chemistry, 2019)

Abstract: With increased awareness of environmental issues caused by traditional petrochemical processes, both academia and industry are making enormous efforts towards the development of sustainable practices using renewable biomass as a feedstock. In this work, the biocatalyzed synthesis of polyesters derived from renewable monomers was performed in safer, bio-derivable organic solvents. Candida antarctica lipase B (CaLB), an enzyme belonging to the Ser-hydrolase family (adsorbed on methacrylic resin, also known as Novozym 435) was tested for its performance in the synthesis of adipate- and furandicarboxylate-based polyesters. In addition, the traditional solvents toluene and tetrahydrofuran were compared with a series of green solvents, 2,2,5,5-tetramethyloxolane, 2-methyltetrahydrofuran, 2,5-dimethyltetrahydrofuran and pinacolone for the enzymatic polymerizations. We can conclude that the monomer conversions and molecular masses of the obtained polyesters in all the tested alternative solvents were suitable, and in some cases superior, with CaLB immobilized via physisorption on acrylic resin being the optimal biocatalyst for all reactions. Strikingly, it was found that for the majority of the new solvents, lower reaction temperatures gave comparable monomer conversions and polymers with similar molecular weights whilst pinacolone yielded better polymers with Mn > 2000 Da and conversions of over 80%. Click here to read the full publication.

Regulation (EC) No. 1907/2006 of theEuropean Parliament and of the Councilon the Registration, Evaluation, Author-isation, and Restriction of Chemicals(REACH) is EU legislation designed toprotect human health and the environ-ment from hazardous substances. Man-ufacturers and importers of chemicals inquantities exceeding 1 ton per annumare required to register their products.If the hazards associated with a sub-stance are deemed unacceptable, it istermed a substance of very highconcern (SVHC). Click here to read more.

A report on ‘labelling requirements for hazard communication and ecolabelling possibilities’ is currently available for the public. The report is prepared by the ReSolve project partner, nova-Institute, Germany. This report focusses on relevant European regulation in a global context to assess and give recommendations for labeling requirements for hazard communication and ecolabelling possibilities for bio-based solvents. The information collected on the ecolabel will serve as a baseline for comparing the actual properties of the solvents in the project and will thus facilitate the selection of the high-potential candidates. Click here to download the full report:

A methodical selection process for the development of ketones and esters as bio-based replacements for traditional hydrocarbon solvents (Green Chemistry, 2018)

Abstract: A “top down” approach to the development of sustainable, greener, low-polarity solvents is presented. Methyl butyrate, ethyl isobutyrate, methyl pivalate and pinacolone were identified as potential target solvents from trends in Hansen solubility parameters and known physical properties. Solubility, flammability and physical properties were determined which showed their potential to replace traditional, hazardous, volatile, non-polar solvents such as toluene. Each new candidate then demonstrated their suitability to replace these traditional solvents in solubility tests, despite being esters and ketones, each candidate demonstrated their similarity to traditional volatile non-polar solvents in terms of their solubility properties by their ability to dissolve natural rubber, a particularly low-polarity solute. This was reinforced by their performance in a model Menschutkin reaction and a radical-initiated polymerisation for the production of pressure-sensitive adhesives, where their performance was found to be similar to that of toluene. Importantly, a preliminary toxicity test (Ames test) suggested non-mutagenicity in all candidates. Each of the four candidates can be synthesised via a catalytic route from potentially renewable resources, thus enhancing their green credentials. Read the full article in Green Chemistry.

Public report available:‘regulatory human- and environmental safety requirements of solvents in relation to their production-volume and use’

A report on ‘regulatory human- and environmental safety requirements of solvents in relation to their production-volume and use’ is currently available for the public. The report is prepared by the ReSolve project partner, BioDetection Systems b.v, Amsterdam (WP leader 4). This report focusses on relevant European regulation in a global context. All formal requirements for registration, classification and labelling and risk assessment are reviewed and the steps required are summarized. The REACH Regulation and its registration and information requirements are a major driver as also recognized in the recent European standardization Committee standard CEN/TS16766 on bio-based solvents, requirements and test methods. This hazard information gathering may result in identification of substances having dangerous properties that are to be communicated via specific classification and labelling prescriptions. Click here to download the report.